One rare positive development amid the tragic darkness and death of the Ukraine war is that prisoner swaps have now become routine.

Many dozens of POWs have been freed in the latest Saturday exchange, both sides have confirmed, with the Ukrainian presidency's office saying 116 Ukrainians were freed. On the Russian side, the defense ministry said that 63 of its troops had been returned, some among them likely high profile - meaning 179 prisoners freed in total during the swap. 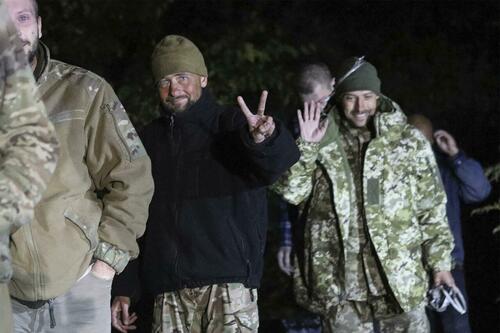 Ukrainian soldiers released in a September prisoner swap, via AP.

Russia indicated that some among these were deemed "special category" prisoners - perhaps higher ranking officers or even intelligence operatives, following a deal that was mediated by the United Arab Emirates.

"The intelligence confirms to us that including today, this is the 37th prisoner swap that has taken place since the war began last year," a Zelensky advisor announced from Kiev.

Additionally, "He said the released POWs include troops who held out in Mariupol during Moscow’s monthslong siege that reduced the southern port city to ruins, as well as guerrilla fighters from the Kherson region and snipers captured during the ongoing fierce battles for the eastern city of Bakhmut," according to the Associated Press.

One international war correspondent observed in the wake of the swap, "We’ve seen in the last few months that these releases have become routine."

A new study published in PNAS on Jan. 23, 2023, has shown that antidepressants, some of the most widely prescribed medications in the world, cause antibiotic resistance, giving them the potential to become dangerous superbugs.

“Even after a few days exposure, bacteria develop drug resistance, not only against one but multiple antibiotics,” Jianhua Guo, one of the study’s authors and a professor at the University of Queensland’s Australian Centre for Water and Environmental Biotechnology, told Nature. “This is both interesting and scary.”

Every one of the antidepressants caused the E.coli to develop antibiotic resistance, but two in particular, sertraline (Zoloft) and duloxetine (Cymbalta), had the most pronounced effects, producing the largest number of resistant bacterial cells.

Brazil has unleashed anger from environmental activists around the globe after the government ordered the sinking of a decommissioned aircraft carrier in the Atlantic Ocean, a plan carried out on Friday.

The "planned and controlled sinking occurred late in the afternoon” about 220 miles off the Brazilian coast, in a place with an "approximate depth of 5,000 meters [16,000 feet]," Brazil’s Navy confirmed in a statement.

"Regarding the hull of the decommissioned aircraft carrier 'Sao Paulo' … we inform that the operation of a planned and controlled sinking was carried out late in the afternoon, February 3, in strict accordance with the plan," the navy explained.

Though the navy said it sunk the ship in the safest possible area, after authorities couldn't find a port that would permanently house the huge, 60-year old carrier, environmentalists are outraged and called on recently installed Brazilian President Luiz Inacio Lula da Silva to halt the navy plans on an emergency basis.

The activists have described that the carrier is filled with toxic materials, including asbestos and heavy metals which will inevitably flow into the ocean water and harm marine life.

The state of Florida is yanking the liquor license of an Orlando performance venue, saying the “Drag Queen Christmas” show it hosted in December was sexually explicit while being marketed to families and children. 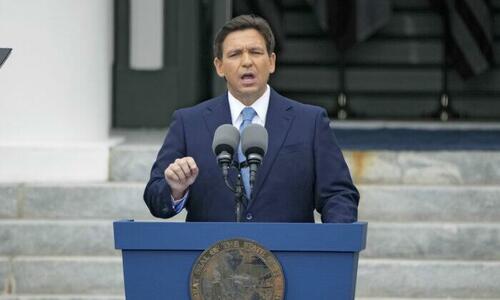 Florida Gov. Ron DeSantis speaks after being sworn in to begin his second term during an inauguration ceremony outside the Old Capitol in Tallahassee, Fla. on Jan. 3, 2023. (AP Photo/Lynne Sladky)

Advertising for the event “did not provide notice as to the sexually explicit nature of the Show’s performance or other content,” the state’s Department of Business and Professional Regulation’s Division of Alcoholic Beverages and Tobacco said in its complaint against the Orlando Philharmonic Plaza Foundation Inc., filed Feb. 3.

“Respondent promoted the Show using targeted, Christmas-themed promotional materials that did not provide notice as to the sexually explicit nature of the Show’s performance or other content,” the complaint said, referencing a photo of the event’s listing online included as evidence.

“Rather than call attention to the Show’s sexually explicit content or acknowledge that it might not be appropriate for children, Respondent’s promotional material unequivocally stated “all ages welcome.”

“Prior to the Show occurring and based on media reports about the Show at other locations, Petitioner sent a letter to Respondent notifying Respondent that ‘sexually explicit drag show performances constitute public nuisances, lewd activity and disorderly conduct when minors are in attendance’ and that, if Respondent failed to ensure that minors were prohibited from attending such performances, its license would be subject to penalties up to and including revocation.”

Previous constant headlines of the Ukraine-Russia war were put on pause Friday into Saturday as the American public's attention and discourse got temporarily consumed by the bizarre Chinese 'spy balloon' saga, which grew more dramatic by the hour until it was shot down by the Pentagon over the Atlantic Ocean.

But few are currently asking the necessary deeper questions related to the timing. Given the last major balloon crisis to take over 24/7 network news coverage ended up being a complete hoax (remember the "balloon boy" stunt of 2009 which had the world breathless and on edge for a full news cycle?), the current context to the Chinese balloon story and the question of cui bono is worth a deeper dive... 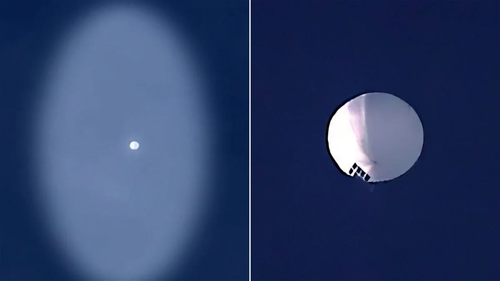 Entrepreneur and geopolitical commentator Arnaud Bertrand, who as a Westerner has spent many years living in China and frequently attempts to correct the often misleading analysis of mainstream press reports, offers an 'alternative view' of what's fast unfolding below [emphasis ZH's)...

"I took a bit of time to dissect the “spy balloon” story - both how it is portrayed in the US and China’s response," Bertrand begins a lengthy thread. As you'll see, the more you think about it, the more stunned you get at the sheer absurdity of the whole thing."

The war in Ukraine is not just about Ukraine and Russia with the U.S. and NATO acting as seemingly benevolent supporters of Ukraine, as the Western media portray.

The United States and its NATO allies are deeply involved in the conflict.

The military withdrawal from Afghanistan in 2021 – after 20 years of futile occupation – was a calculated “reorganization of firepower” against Russia, says Pepe Escobar.

Ukraine is merely a proxy and ultimately cannon fodder for American imperial planners.

This war is part of a bigger geopolitical confrontation between the U.S. and Russia, China and other nations that are pushing for the emergence of a multipolar world. That is a multipolar world no longer under the hegemony of U.S.-dominated Western capitalism.

Mark Kerry was a healthy 48 year-old from Worcestershire, a father of three, grandfather of two and a loving husband to his wife Melanie. Together with Melanie, Mark loved life and lived it to the full, they socialised with friends every weekend, loved to travel and loved holidays.

Mark and Melanie run mobile home parks and were heavily impacted in 2020 when the COVID-19 pandemic hit. With the mobile home business being a mixture of residential and holidays, the holiday side was halted when lockdown and heavy restrictions were enforced. As with millions of people worldwide, they found themselves spending most of their time at home.

Like most of us, Mark was eager to get life back to some form of normality and, knowing the business was suffering and being self-employed, the quicker the better.

In late 2020, nine months into the COVID-19 pandemic, it was announced that a Covid vaccine had been approved and was being rolled out to stop the spread of the virus and save lives, ready for use in December 2020.

Democrat and Confederate President Jefferson may have been unable to expel President Abraham Lincoln from the capitol, but Democrat delegate Eleanor Norton (D-D.C.) might.

The statue has stood in Lincoln Park near the Capitol since 1876. It depicts a slave, shirtless and shackles broken, about to stand up. Lincoln stretches out his hand over the man.

Freed slaves paid for its creation. But according to Norton’s press release, that’s not enough.

AHouse-passed bill rescinding $71.5 billion for the hiring of up to 87,000 IRS agents has languished in the Democrat-led Senate for nearly four weeks without a vote.

The funding was part of the $740 billion Inflation Reduction Act (IRA) that Democrats passed last year.

House Speaker Kevin McCarthy pledged to schedule a vote to eliminate the funding as his first order of business in the new, Republican-led House. The GOP bill passed along party lines on Jan. 9.

Republicans have argued the funding could be used to target Americans earning less than $400,000 per year with additional audits. In response to the criticism, Treasury Secretary Janet Yellen wrote to the IRS instructing the agency not to use additional resources to target individuals or families in that category.

Webmaster addition: That include marijuana? :)

Mech “The Bot” Johnson, a 15-foot-tall and 8,800-pound human-controlled robot suit, is working with Sapphire Las Vegas’ security detail during the four-day Consumer Electronics Show that kicked off Thursday.

The robot will be stationed outside the strip club’s gates to keep those waiting in line thoroughly entertained, likely because it is too massive to fit through any door frames.

“He will be protecting us all from the Ai bots taking over the Las Vegas #CES convention so that you may party worry free all weekend long!” the club said in an Instagram post.

Weighing nearly 4.6-tons, The Bot is a “human-controlled giant, powered all-terrain robotic ‘mech’ suit” that was flown in from Vancouver for CES, Sapphire Las Vegas said.

Bill Gates would rather pay for vaccines than travel to Mars
By: malterwitty
Peter Schiff: Economic Slowdown will Fuel Inflation Fire... The FED & Government Spending Creates Inflation...
By: alexmark
Paris pensions reform protest getting worse everyday- Old people must go, more COVID19 vaccine needed
By: alexmark
Meanwhile in Britain ... huge strike shuts down parts of UK ...
By: alexmark
SP500 Price/Sales ratio is currently at levels of 2000's dot-com bubble top
By: alexmark
The government is forcing a dairy farm in Southern Ontario to dump 30,000 litres of milk straight into the sewer so we pay $7 per liter of milk
By: alexmark
Massive Peer-Reviewed Mask Study Shows 'Little To No Difference' In Preventing COVID, Flu Infection
By: alexmark
People Compare the Modern West to Weimar and Collapsing Rome but It Is Far Worse Than Both Those Things
By: alexmark
'The Scandal Would Be Enormous': Pfizer Director Worried About Vax-Induced Menstrual Irregularities
By: malterwitty
HILARIOUS: Arrogant celebrities threaten total Hollywood strike until every last person in America gets vaccinated and boosted for covid
By: malterwitty
AI system cloning of human voices reaches creepy new level of achievement now you can never trust that what you hear is HUMAN
By: malterwitty
Energy firms exposed for hoarding 9bn of customers' cash despite cost of living crisis
By: malterwitty
Fresh humiliation for Navy's 3bn flagship aircraft carrier which now needs MORE repairs
By: malterwitty
EU warns Zelensky 'Don't expect to join us any time soon': Bloc quietly plays down any hopes of fast track membership, saying Ukraine 'is no exception'
By: malterwitty
Lockdown fallout pushes UK economy into 'perma-stagnation' as thousands give up jobs or retire after pandemic, with Bank of England warning Britain is facing highest tax burden in 70 years
By: malterwitty
The Great Tech-xodus: How the likes of Meta, Microsoft and Amazon have had to fire a quarter of a MILLION staff after overhiring during Covid, gambling on 'blue-sky ideas' and being tripped up by a slowing economy
By: malterwitty
Kevin McCarthy Says Coward Cop Who Shot Ashli Babbitt 'Did His Job'
By: ChrisMenahan
Food Shortages Are Starting To Become Quite Serious All Over The Planet
By: alexmark
Challenger Job Cuts Rise 440% In January
By: alexmark
First Nations Chief Accused of Bullying Staff Calls Outside Probe of Her Workplace Conduct 'Colonial'
By: ChrisMenahan